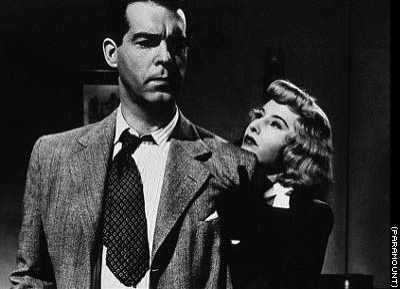 A deliciously stunning blonde is something to beware. Unlike the dumb blond jokes told so often at the work place, in the realm of film noir a blonde is not to be taken so lightly. That cunning brain will play dem looks to her advantage, coyly showing weakness and big watery eyes. It's the cynical, in over his head protagonist who'll get caught up in whatever scheme she's cooked up, and generally take the fall for her. Disillusioned because of a tarnished past, or perhaps obsessive sexual desire the hero clamors his way through a tight dark place to barely come out surviving, and ultimately losing.

In the 1940s a new style entered the cinemas that was stark, low-key, and ambiguous in its morality. A style that would later be coined as film noir (literally dark film) by the French after World War II when they saw these films that had emerged from America during the war years. Seedy characters in a bleak underworld, fighting to survive, and politicians and other officials caught up in corruption populated the world of these films. So often the protagonist wouldn't come out clean, or started out just as dirty as the rest of those in the gutter. The use of low-key lighting, deep focus photography, disorienting visual schemes, and jarring editing put emphasis on the setting that the protagonist was in, marking his decent.

The sex roles of the classic, yet everlasting, film noir jarred viewer's perspectives on genders that populate its dense asphalt jungles.

The setting was a cause for disdain, as it often brought back a memory. According to Tim Dirks of filmsite.org wrote in his article on film noir, "The protagonists in film noir were normally driven by their past or by human...