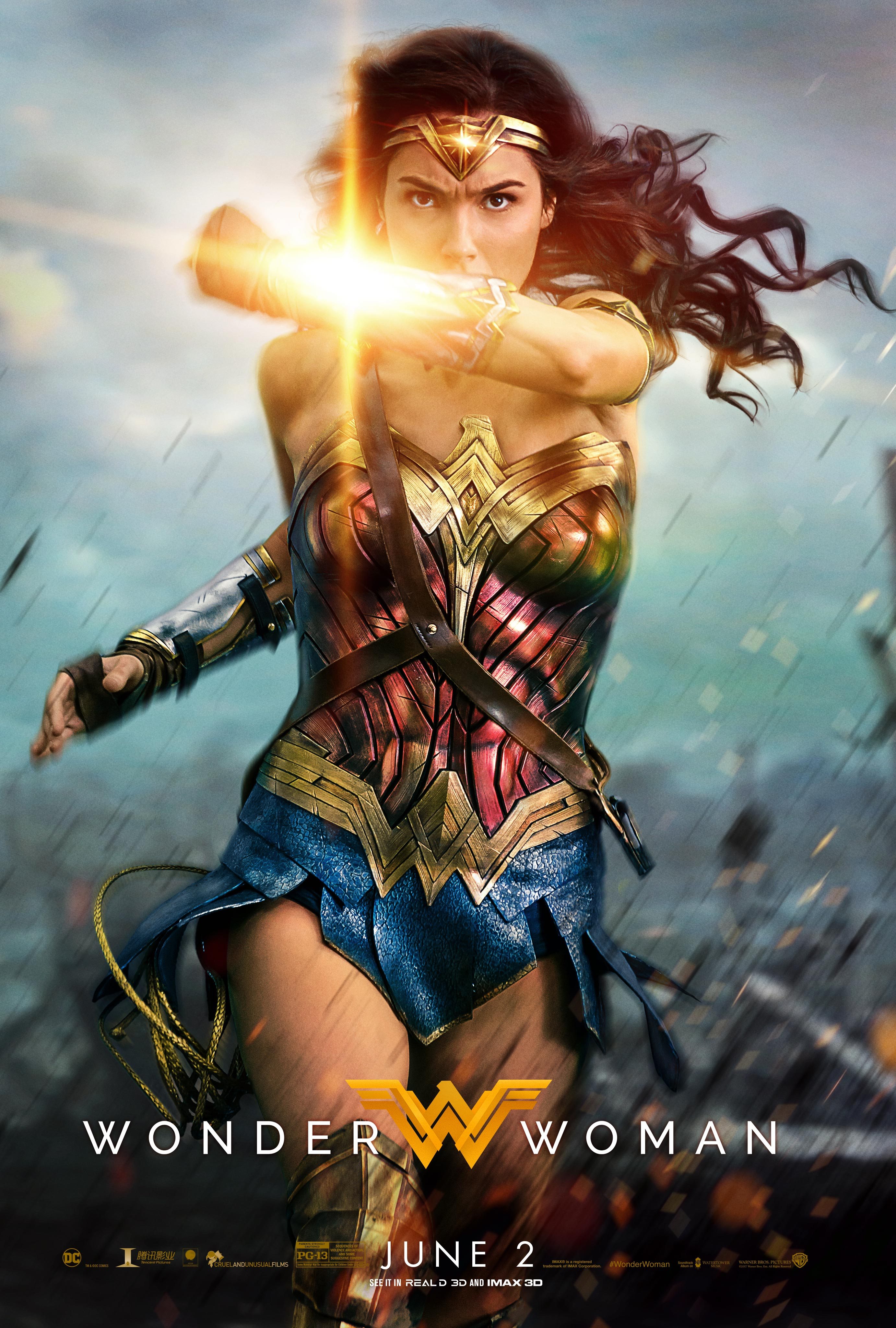 It's been a while since I last wrote a review. To be honest I got tired of writing negative reviews. Going to so many bad movies has taken a toll on my ability to write a review a day after seeing a movie. Wonder Woman is such a fun and wonderful movie that it helps make it easy to write this review. A large amount of the credit for this belongs to Director Patty Jenkins and star Gal Gadot.

To start I have not been a fan of the recent DCEU movies. I thought Batman vs Superman: Dawn of Justice was awful and an absolute mess of a movie, and Suicide Squad was just as bad, if not worse. I mildly enjoyed Man of Steel, so a lot was riding on Wonder Woman. DC and Warner Bros. delivered. This movie was a breath of fresh air in a market over-inundated with super hero movies.

The movie is not without some things I wish could be improved, such as cutting out the bookends. It wasn't necessary, but I understand the purpose due to DC needing to fit this inside it's established DCEU Movie Universe. And I'll get more into the detail of the other parts that could have been improved later in this review when I go into spoiler territory.

The story was well constructed and easy to follow, and this was great because it allowed for the audience to get connected to Diana's character. The central conflict is introduced in a nice creative way where we get cool visualization with expositional dialogue. I was not bored at all throughout the film; The story moves along at a good pace. It has a good amount of humor to keep things light while still having very dark themes and subject matter. Overall, the character development and strong storytelling earned the big visual effects spectacle ending that so many of these large blockbusters don't earn.

Gal Gadot was absolutely fantastic in the role. I was initially hesitant about her casting in Batman vs Superman due to the only previous acting credentials were in the Fast and Furious movies, which weren't exactly the best performance roles. She functioned a lot more as eye candy there. Gal and her Wonder Woman was the best part of Batman vs Superman, but it was in this movie that she really shined. She completely won me over, and I'm sure she is doing the same with the rest of the audience. Not only did she handle the physicality of the role with perfection, but she provided a strong emotional performance that kept the character grounded and in our hearts.

Chris Pine's Steve Trever character was a lot better than I expected. I've been a fan of Chris Pine since the first Star Trek film, and even in a smaller movie called Bottle Shock. Last year he was great in Hell or High Water, and his performance in this movie was the right counterbalance to Gal Gadot's Diana. Their chemistry was covalent and explosive. (Sorry for the pun.) It was enjoyable every time they shared the screen.

The rest of the cast was also very good. They all served their purpose well and helped support the main performances of Gal and Chris. I think a lot of the excellent performances also have to be credited to Patty Jenkins who showed that she understands that it's the characters that audiences care to see on screen and not the big spectacle. The spectacle is icing on the cake, and she baked a delicious treat with this movie. All the ingredients were right.

This all culminated in one of the best scenes in the movie. Diana is in the trenches on the front of World War I and witnessing the horrors of war first hand. She can't stand idling by as everyone suffers. When she rises from the trench and makes her way across No Man's Land it is an exhilarating and momentous event. This is the moment the audience has been waiting for all movie, and the entire sequence that follows is one of the most memorable in cinematic history. It takes an incredibly strong woman to show men what true bravery and justice is. And this entire moment is earned by Wonder Woman from what Patty Jenkins and Gal Gadot has provided the audience so far.

This is where I do want to go into spoiler territory a bit, so if you haven't seen the movie it might be best to skip to the last paragraph. The one area where I do have to criticize the movie in the slightest bit is the last act big visual effects spectacle battle. The movie appropriate earned this, and so credit needs to be given to Patty Jenkins for do such a difficult task.

The issue is with the development of the main antagonist Ares. I didn't have an issue with the fake out that Ares wasn't Ludendorff but instead Sir Patrick. That was fine. The issue is that I don't understand Ares' powers. It's a small complaint, but one that does beg the question because of a few things. Without it established it makes me ask questions during moments that I should not be. I should be caught up in the story and conflict. Next, he ended up being a one and done villain, which I hate in superhero movies. I'd prefer his character to remain as a long running antagonist to Diana. Always there taunting her throughout the franchise. If the filmmakers had done this it would have been a nice improvement.

I didn't have an issue with the Godly powers being displayed and Steve realizing that Diana was right about Ares, as that was a good moment. I think it went a bit too far. There was a ton of destruction going on at the weapons facility. I understood and could see everything going on so that was a breath of fresh air as opposed to other blockbusters that hide the action. It is a matter of interest waning due so many big blockbusters needing that final visual effects spectacle. Logan earlier this year taught us that it can be smaller and work.

Nonetheless, I really liked the way it allowed Diana to be distracted by Ares and require Steve to make his pivotal decision to sacrifice himself in order to stop the chemical weapon from being released on the front. It was a great moment, and well earned. It also helped make the bookends work because that final moment when Diana thanks Bruce for returning Steve to her by sending her the original photograph was earned. The relationship between Diana and Steve was so well constructed that the audience felt emotionally attached. That was pivotal. End spoilers.

Throughout this review I've used the word "earned" a lot. That's because this movie earned our respect. Patty Jenkins and her team earned our admiration. Gal Gadot earned our love. Wonder Woman earned it's place in history as a fantastic super hero movie spearheaded by a woman. I can't wait for the sequel and hope that it too earns so much praise.