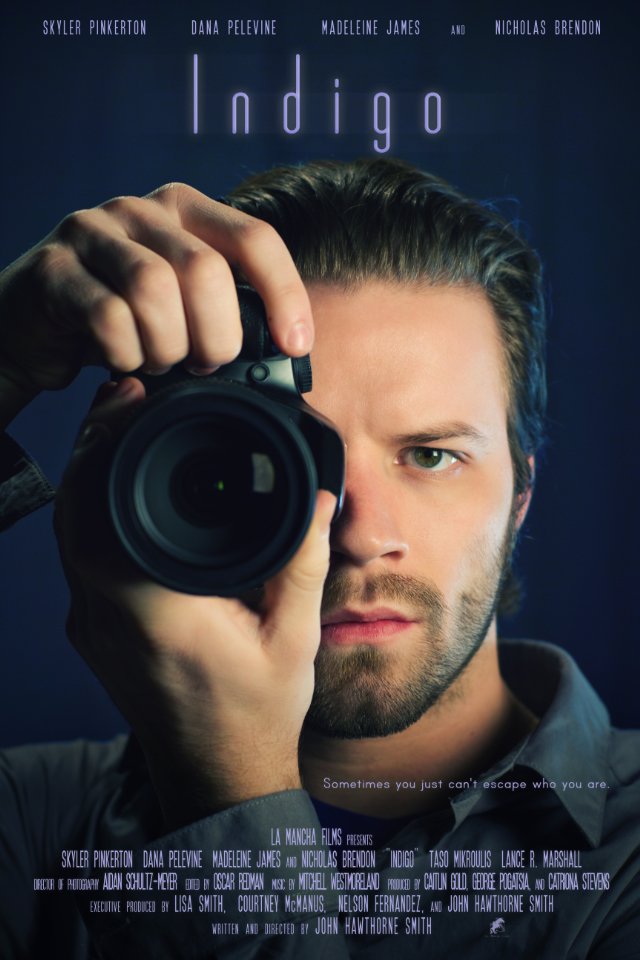 Recently I had the great pleasure of being invited to the private screening of the new indie feature Indigo from writer and director John Hawthorne Smith and his production company La Mancha Films. The film stars Skyler Pinkerton, Dana Pelevine, and Nicholas Brendon. It's a refreshingly dark indie film that was magnificently well done.

The story is about Eli Casey, an up-and-coming photographer and recovering heroin addict, who implodes after his son is kidnapped. He separates from his wife. He stops working. He gives up. As a favor to his agent, Eli begrudgingly agrees to shoot a wedding. While there, he takes a picture of a suspicious couple who offer to bribe him in return for deleting certain photos. Eli refuses. The next day, Eli discovers that the flower girl at the wedding disappeared and Eli sets out to conquer his demons and save the girl.

It's a tense thriller that never has a dull moment, as each scene moves at an even pace. It's an on the edge of your seat thrill-ride from beginning to end as you watch Eli descend deeper and deeper into a dark underworld. Upon reaching the film's end you've experienced something completely uncommon in American cinema, however if you're familiar with the French New-Wave and Italian Neo-realism you'll see similarities to the films from those same masterful European filmmakers.

The cinematography by Aidan Schultz-Meyer was spectacularly well done. This was a movie shot on the Canon 7D! Yes the 7D. And it looks incredible. However, the opening shot was on La Mancha's new RED Epic, but that doesn't detract on the stunning images Aidan captured for the film with the 7D. Each scene is mesmerizing with the way that Aidan lensed and photographed the moments. He used Zeiss lenses, which helped the 7D get the stunning images, and as a result the film feels as if it were shot using a cinema camera.

The editing by Oscar Redman complimented the cinematography wonderfully, and there were many clever ways of conveying information through texts, or tweets even, that appeared on screen. Plus as the characters scrolled through the message on the phone the audience scrolled with them while being able to witness their reactions. There was one stunning well done scene when Eli and his wife realize that one of Eli's photographs of the wedding contains more than meets the eye. Between the beautifully shot images and the tense cuts it is arguably on par with most major features.

That leads to the performances, which were spectacular. Everyone was perfectly cast. Skyler Pinkerton (Eli Casey) portrayed a man descending further and further into a deep hole of despair wonderfully. There are moments when he conveys emotion that resonates off the screen and into your heart. Equally as stunning was Dana Pelevine (Cathy Casey), who held a commanding presence on screen. You completely feel for her character because of the verisimilitude that Dana brings to the performance. The fate of this couple is central to your emotional entanglement with the film, and both Skyler and Dana pull you in so well. And then there's Nicholas Brendon (Gary), who most will recognize as Xander from Buffy the Vampire Slayer, who plays the film's mysterious man that Eli photographs at the wedding. Nicholas does an amazing job playing this mysterious individual who is generally calm and cool, and yet he has this great moment when he loses control while on the phone with Eli. It's an explosive performance.

Finally the sound design of the film was exceptionally well crafted for an independent film. The music composed by Mitchell Westmoreland was haunting and chillingly beautiful. It was perfectly juxtaposed to the soundscape developed by sound mixer & editor Peter Seeba. It feels like the urban landscape of New York, and is hauntingly full of solitude moments that help the audience get lost in the protagonists world.

Ultimitately this gem will be making it's festival debut soon. From there keep your eyes peeled for the first opportunity you can get to see it. This is a must see for cinephiles. I look forward to more from John Hawthorne Smith and the La Mancha Films team.