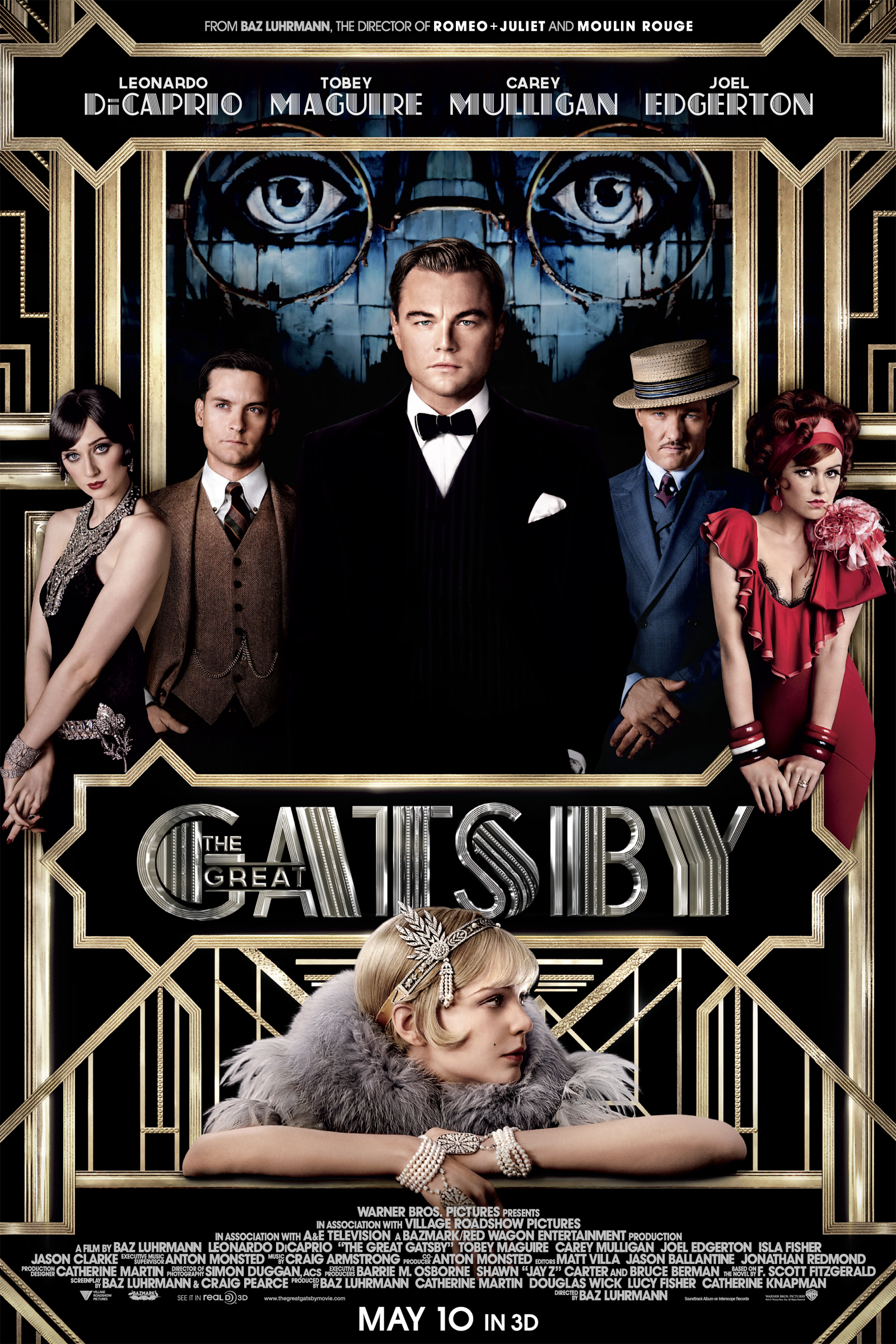 The Great Gatsby was first a book by F. Scott Fitzgerald. First published in 1925, and set in 1922, it is one of the great American novels that depicts the Roaring 20's in all its glory. The book has been adapted into movies throughout the 20th Century and into the 21st. The first movie adaption was done in 1926, and is claimed to be the most faithful adaption. It is a lost film, but as the years continue to pass by it is unlikely any copies of the complete film will emerge. All that remains is the trailer, which is in the National Archives. There was one made in 1949, then the most famous screen version with Robert Redford as Jay Gatsby was done in 1979, followed by a made-for-TV version in 2000. The latest adaption hit theaters in 2013...

The Great Gatsby directed by Baz Luhrmann and starring Leonardo DiCaprio (Gatsby), Carey Mulligan (Daisy Buchanan), Tobey Maguire (Nick Carraway), and Joel Edgerton (Tom Buchanan) was released in theaters on May 10, 2013. Critics met it with mostly negative reviews, but for the most part it's not as bad as they make it out to be. In fact, it's a pretty decent adaption that captures most of the essence of the book. Naturally there are a few changes, and it seems to focus more on the relationship between Gatsby and Daisy while completely ignoring the relationship between Carraway and professional golfer Jordon Baker (Elizabeth Debicki). One thing it completely missed was the music of the era, as it contained a lot of anachronistic music from the modern era.

Although it wasn't completely intrusive, it did cause some annoyance since the jazz music of the Roaring Twenties was essential to the time. During the grand party scenes held at Gatsby's illustrious mansion it seemed odd to witness this because it made the film feel as though it was a retro party as opposed to a party happening in that time period. This did a huge disservice to amazing and spectacular costume design, hair and make-up, and set decoration that appropriately captured the era. The modern music hurt the dance moves that belonged to the era as the music is essentially part of whole.

One of the great things that Luhrmann found a way to do was incorporate as much of Fitzgerald's prose into the film as he could. This was accomplished through Carraway's narration, which was done through a clever new framing device of him retelling his tale in a psychiatric hospital. Often the words appeared on the screen as Carraway wrote down his memories of the events. The prose and way in which Fitzgerald wrote the novel is what makes it so popular amongst scholars.

The performances in the film were a mixture of perfect and almost there. DiCaprio was perfectly cast, and delivered an electrifying performance that pulled the audience in. He managed to capture the obsessive nature of Gatsby's unacquainted love and desire to impress perfectly, while the optimistic attitude radiated with each smile. He played the strongly confident party host, the nervous tea guest, and the furious adulterer all in a singularly expressed genius. He was matched by Mulligan who captured Daisy's innocence, naivity, and weak moral being. She was very desirable, warm and full of energy, and yet at the same time coldly distant. She was perfectly cast as well. Edgerton played the adulterous and cuckolded husband nicely. This was a finely developed performance, but yet it left more to be desired. Tom needs to feel more like a spoiled and jaded rich man who can't be impressed by anything. Lastly Tobey Maguire was only okay in the role of Nick Carraway. He did a fine enough job, but it seems like he wasn't the perfect choice. Sam Waterston, who played Nick Carraway in the 1979 version, was a better choice then and had a better performance.

Like the 1979 version this one did feel a bit long, but unlike the '79 version it didn't feel like a long bore. Luhrmann's kinetic style helped keep it alive, and yet in the quiet scenes he handled it beautifully. The movie was filled with Luhrmann's cinematic style, which was both benificial and a bit of a detrament. The lavish production exceeded even beyond any previous adaption, but even felt like it exceeded the era's own lavishness. Nonetheless the film worked as an escape into that era…

Which brings us to the stereoscopic cinematography that was used magnificiently. This is the best use of stereoscopic 3D in a dramatic picture, and not only helped capture the extravagant parties liveliness but also the brilliant performances between the actors. Paired with spectacular lighting and color design the cinematography was incredibly breathtaking. Shot natively using 3ality Technica rigs, this movie will hopefully pave way for more native stereoscopic dramatic features. Lurhmann and team did a fantastic job of utilizing the stereoscopic space, and completely immersed the audience into the era. Hands down this is a must see in stereo 3D.

In the end this may end up being the best adaption of Fitzgerald's story to date. It captures the essence of the novel in its extravagence and grandness. It is like its titular character in its ambitious need to win the audience's affections through its lavish production design and style. It must be seen in stereoscopic 3D and it must be seen for the peformances.