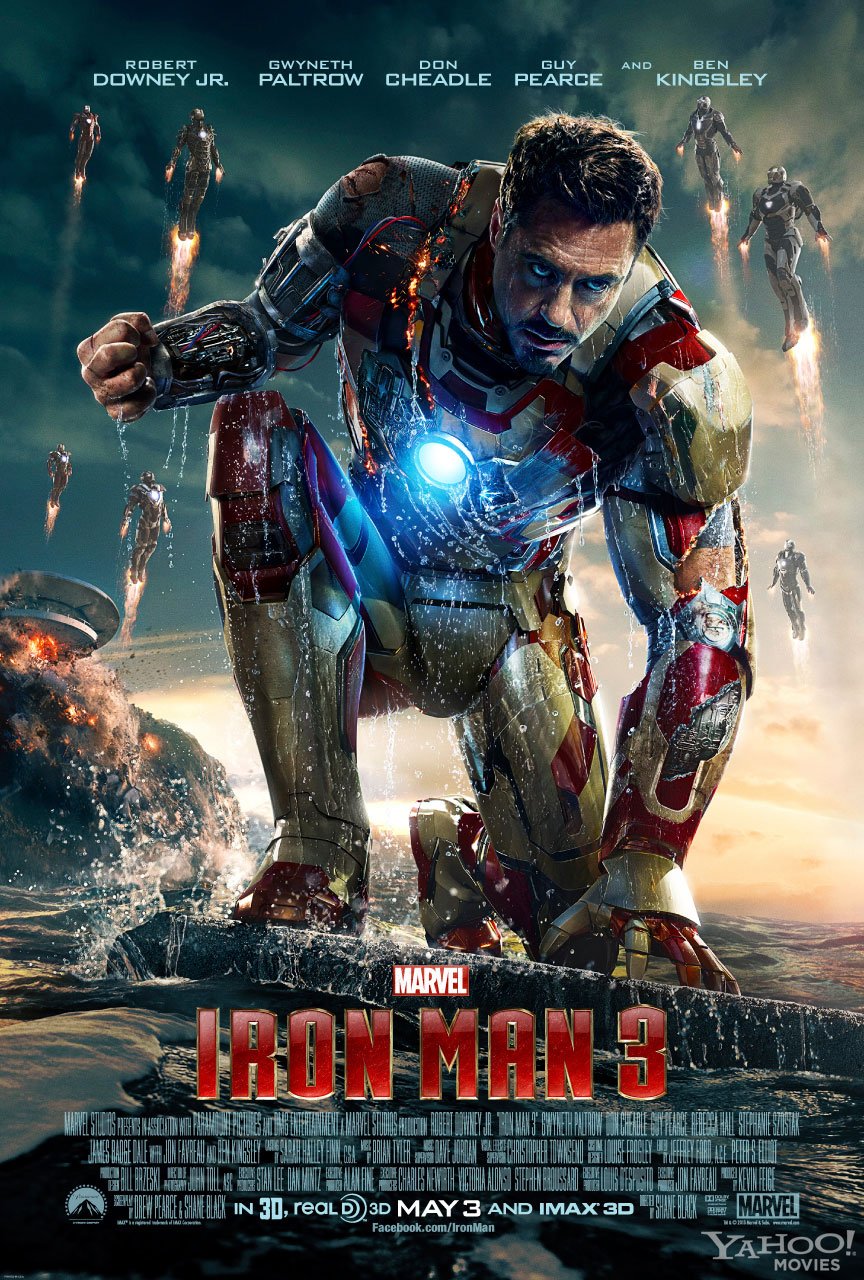 Iron Man 3 completes the journey Tony Stark started in the first film released in 2008, and takes place after the events of The Avengers (2012). It is a fun adventure, and a good movie. It surpasses the second Iron Man film, but isn't nearly as good as the first. Now, I need to warn you that I am not familiar with the comics, and thus will only be rating the movie based on how it works as a film by itself and as part of the whole Iron Man trilogy. Let me begin with the story…

The movie begins with a very Shane Black (writer & director) style voice-over, which honestly didn't quite fit into the world established in the first two movies. It didn't quite work too well either as it felt like a lazy way to tell exposition instead of showing it. Nonetheless the movie gets moving quickly enough, and it maintains a pretty quick pace for its two hour running time. Although the story tended to feel a little disjointed, it worked. There were some things that were done well to comedic effect, but likely pissed of fan boys. Guy Pearce worked effectively as the antagonist, and it's in large part because he's such a fantastic actor. Character development wise Tony had better development than the second, but not nearly as good development as the first. However, what they establish as his short-coming at the beginning of the film is overcome by the end.

The performances in the film were top notch. Robert Downey Jr. owns the role of Tony Stark/Iron Man. By now he's got the role down and completely escapes into the character. Gwyneth Paltrow returns as Tony's better half Pepper Potts and gets a lot more screen time this time around. She even gets to don the famous suit! She has great chemistry with both Robert Downey Jr. and Guy Pearce. As stated before Guy Pearce is fantastic in his role as antagonist Aldrich Killian. Ben Kingsley is the second antagonist in the film, and even though he's great in his performance he's under used. Also, from my understanding there's a deterrence from the comics in the way his character, The Mandarin, was written. It worked well enough for the film as a standalone, but still with a performer such as Kingsley the character could have been better developed. Don Cheadle returned in the role of Colonel James Rhodes, as he wasn't replaced like Terrence Howard after one go in the role. He did a fine job in the role again, and got to have equal screen time to what he had in the last. This time it felt like he had more fun with the role. Rebecca Hall and James Badge Dale also round out the rest of the cast in well acted roles.

The stereo 3D conversion on the film was spectacular. Not surprising these days, but still a pleasant thing for the eyes. Although there were a few moments where the 2D cinematography wasn't meant for stereo 3D, it overall worked great. Although all the digital elements are easily rendered in 3D since they're built that way in the computer. It merits mention however that there was a clever use of 2D and stereo in the film. All of The Mandarin's broadcasts are in 2D. When they fill the whole screen everything plays in 2D, and then when they appear on a screen in a set the set is stereoscopically rich as the broadcast continues to play in 2D. This especially helped emphasis the use of stereoscopic space, and instantly became this reviewers favorite use of 3D in the film. There were plenty of other great stereo moments, especially during the climatic battle. The visual effects were spectacular, as is to be expected, and were as dazzling as ever. Paired with top notch sound effects this film was technically solid.

Overall this film comes in at a 3.5 to 4 out of 5 stars. It's graded down on the story and the small lack of proficient character development. It is enjoyable, fun, and a good film. It's definitely worth seeing in theaters and in stereoscopic 3D. It is this reviewers recommendation that you go see it.