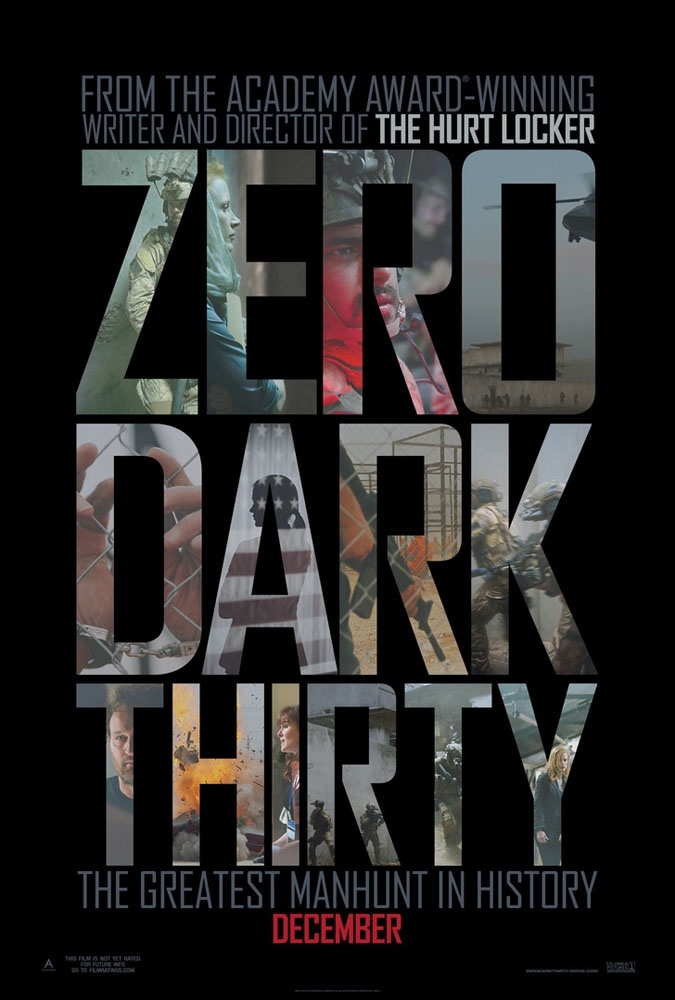 The movie begins with a black screen and sounds of calls and other radio chatter regarding 9/11. We then find ourselves in Pakistan on the hunt for Osama Bin Laden. Yes, the movie begins with a torture scenario to ascertain information. No, the whole movie is not about how torture got CIA operatives reliable intelligence that led them to Bin Laden. It was one method used early on, and quickly is proven to be a so-so method.

Kathryn Bigelow did an amazing job in bringing this gripping story to the screen. It truly is a manhunt that will be remembered throughout history as one of the most harrowing and challenging for the world’s greatest criminal. Bin Laden may be labeled a terrorist, but in the end he’s nothing more than a criminal who orchestrated the mass killings of thousands of people. The film portrays the manhunt in a similar fashion to Gillo Pontecorvo’s masterpiece La battaglia di Algeri (1966). The cinematography has that same documentary style grittiness to it, and splices real news footage amongst the shot footage.

The main protagonist, Maya (Jessica Chastain), is a dedicated CIA operative who spends nearly a decade fixated on hunting down Bin Laden. Chastain nails her portrayal of this headstrong woman who sees a connection that her colleagues fail to recognize. It’s because of her devotion to finding a courier believed to be Bin Laden’s go to courier that the compound he was hiding in was able to be discovered. The film presents this challenging operation in exactly the manner that befits the truthfulness of the events.

The cinematography paired with the editing is tight. This is my pick for Best Editing this year. The sound design is perfect. The music is barely noticeable, which is absolutely right, but it does play a wonderful advocate to providing an atmosphere and texture to the film’s narrative. Instead the audience can mainly focus on the dialogue, environmental sounds, and practical sounds. It’s layered appropriately with all the elements of a wonderful docu-drama that retells a story the public must know.

Every one of the cast members is excellent. The writing is solid and provides great scenes taken right out of the bureaucracy of military protocol versus real world realities. The cast fills these scenes with the appropriate intelligence and military types, all with a single goal, but different views on how to achieve it. All of it brings to the forefront the hardworking souls who dedicated their life to finding Bin Laden and protecting the lives of the citizens of the United States and the rest of the world.

This is a fantastic movie. It will belong to cinematic history as exemplary filmmaking regarding the retelling of actual events. Is it the Best Picture of the year 2012? That’s hard to say because there were so many great films. It is one of the best. It deserves as many awards as it will get, and has received. This is a must see for this generation.