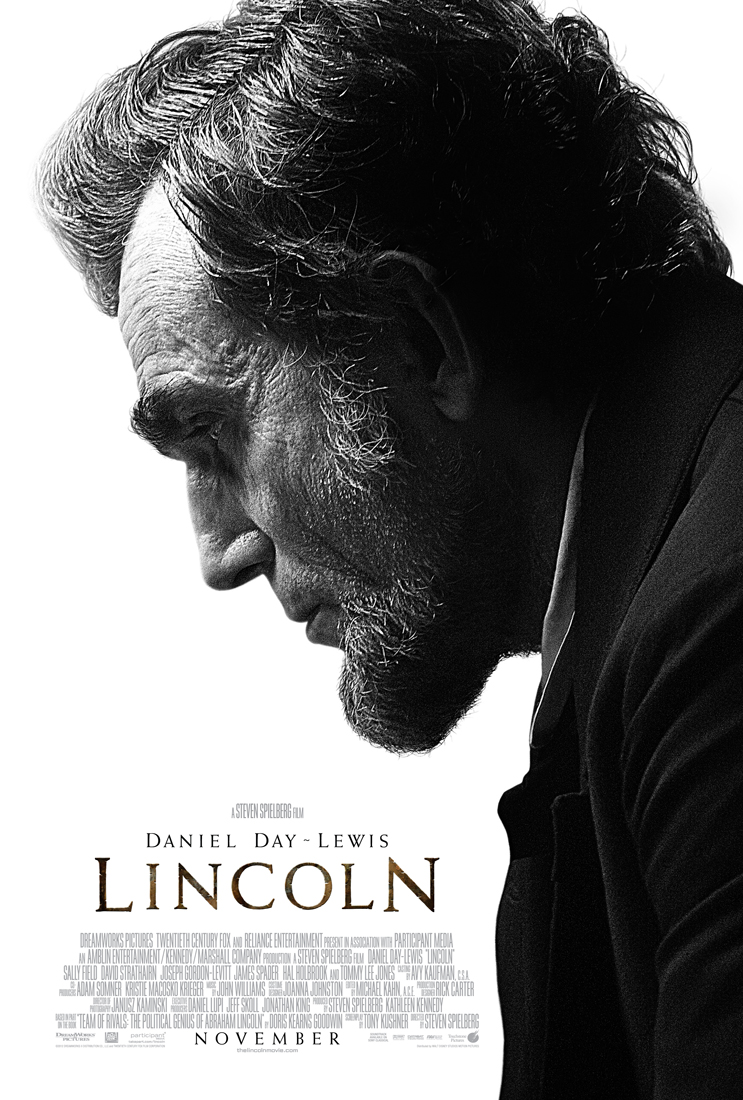 Lincoln is the Best Picture of the year. It's brilliance is very clear because of the performances, the direction, the cinematography, and the sound design. Daniel Day-Lewis nails his performance as Abraham Lincoln, and Sally Fields is magnificent as Molly Todd Lincoln. Both with will win Oscars and other accolades for their performances. Steven Spielberg spent years researching the subject matter for this movie and it shows in his direction.

The star-studded cast that Spielberg hired for this movie are all perfectly cast. There isn't a single performance that didn't meet the high esteem of the historical figure they portrayed. David Strathairn played opposite Daniel Day-Lewis as his Secretary of State William Seward in such an engaging performance that there was never a dull moment between them. Tommy Lee Jones as Thaddeus Stevens will get several Best Supporting Actor nominations during the awards season, and he deserves it. It's tough to say whether he'll win, but he has one of the most electrifying portrayals in the film. And he gets plenty of great lines that he's able to exchange with Lee Pace (playing Fernando Wood) and his fellow Democrats who oppose the 13th Amendment. It makes me wish our elected officials could still come up with such witty insults. The rest of the cast all do wonderful justice as stated before, and deserve mention: Joseph Gordon-Levitt as Robert Lincoln, James Spader as a comically great W.N. Bilbo, Hal Holbrook as Preston Blair, John Hawkes and Tim Blake Nelson as Robert Latham and Richard Schell respectively, and and Bruce McGill as Edwin Stanton.

Spielberg's direction serves the great writing to create one of his best. This movie will live on forever because of his dedication to doing the history justice. And this movie has such relevance to America today as it did when the events depicted took place. His pacing is one that doesn't falter in keeping the audiences attention. He has humor spread throughout the dramatic picture in all the right places. When Stanton yells at Lincoln for going into another story about Ethan Allen when they're awaiting the telegraph news about the bombardment of Fort Wilmington: "You're going to tell one of your stories! I can't stand to hear another one of your stories!" It's a perfectly timed light hearted moment at a time of great importance for all the characters involved. It helps the audience gather a sense that everyone Lincoln surrounded him loved him dearly, but knew him well enough to speak their mind about his personality. It's choices like these that makes Spielberg's direction undeniably, and genuinely, honest.

Janusz Kaminski delivers another cinematic experience that's beautiful shot. His lighting and camera-work is at it's most poignant. The atmosphere feels like a pre-electric America, and all the lighting is so natural that it almost seems like it was shot without lighting. His lenses choices and color correction emphasis all the right moments to create a feeling of a country torn in two. The camera movements are are simple, but at the same time complex. They serve the political narrative and makes it feel as if the audience is there witnessing it in person. I wish it was shot stereoscopically, but it is just as satisfying in standard dimension.

Before concluding special mention needs to made to the African American cast, who don't get nearly as many standout performances, but are nonetheless a solid spine to the movie's power. At the very beginning the two black soldiers (Colman Domingo & David Oyelowo) speaking with Lincoln come across as more intelligent and resolved than the two white soldiers (Lukas Haas & Dane Dehaan) who later come to address him. It's David Oyelowo's repeating of the Gettysburg Address that is more moving to the heart. It is then the freed African Americans closest to Lincoln and his family that have a wonderful influence on him. His maid (Gloria Reuben) and valet are brilliant in their subtle performances. And it's great that the last person we see Lincoln interact with before he goes off to that fated theater is his valet, who he has an endearing relationship with.

Thank you Spielberg and Kathleen Kennedy for bringing this movie to us. At this time in history, with America's first African-American President, and the great political division that is happening, there is no better story to influence and remind why this country continues to thrive from the spirits of those dedicated to improving it.